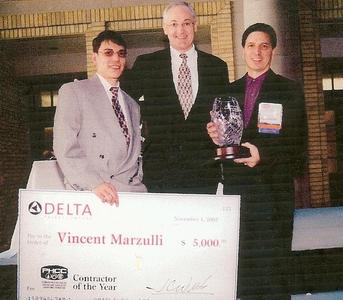 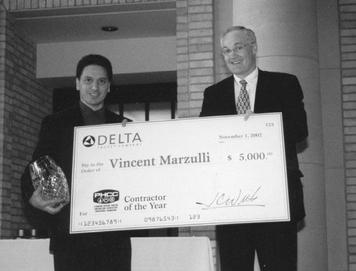 CONTRACTOR  OF  THE  YEAR

Vincent Marzulli, a third-generation plumbing contractor from Philadelphia, was named Plumbing Contractor of the Year during the Delta Faucet Luncheon,  Nov. 1. Candidates for "Contractor of the Year" are evaluated by an independent council of PHCC--NA board members using a 100-point system that weighs their accomplishments in six areas: Professionalism, Merchandising Skills, Management Skills, Innovative Plumbing Skills, Trade Involvement and Community Service. Marzulli, president of Marzulli & Sons/MARZ Inc., has served on the state board of directors for the Pennsylvania PHCC chapter for the past 13 years, known as the Philadelphia Master Plumbers Association. Marzulli is active with the local chapter of Quality Service Contractors. The Philadelphia group raises funds for Children's Rights of Pennsylvania and the Polly Klaas Foundation, which helps find abducted children nationwide. Marzulli's community service also extends beyond U.S. borders. Upon learning from an employee of Haitian descent about the high rate of unemployment and scarcity of educational opportunities for children in that country, he helped establish a school in the city of Port-au-Prince. Using a $1,000 award presented to him by Delta Faucet Co. in 2000 for 1st Runner Up "Contractor of the Year," Marzulli started a child sponsorship program for orphaned and needy children in Port-au-Prince that continues today.

n honor of being named Contractor of
the Year, Marzulli received a check for
$5,000 and a crystal sculpture. "

In other awards, Steven M. Heidler of Edgewater, Md.,     was designated  Apprentice of the Year. Twenty-two       apprentices from across the country were nominated         for this year's award, which is judged by the PHCC--

Committee. Heidler, who graduated at the top of his class from a four-year apprentice-training program last May, was awarded a check for $2,500 and a trophy. ​Finally, six individuals planning on studying a plumbing-related field in college or trade school were awarded $2,500 in scholarship funds from Delta Faucet Co. This year's scholarship winners are: Anthony Saccocio of Bryan, Texas; John Whitten of Colorado Springs, Colo.; John Mike D'Agostino of Leawood, Kan.; James Danielson of Grand Rapids, Minn.; Timothy Baker of Waterbury, Vt.; and Katherine Beetz of St. Louis